Old patterns die slowly. Yesterday I wrote that it really worked to do some thinking before I started doing. Guess what happened today? I started doing as soon as I had identified a chore I would work on. No limits set on the amount of time. Just a vague idea that the chore would be finished when the half empty box of half sorted administration would be organised into a binder (or watchamacallit).

Stupid. Maybe it’s something you’re able to do, because you know when to stop in time. I don’t.

My body will send a number of signals that I’m no longer alright. At the moment the main one is an enormous amount of tension between my shoulders. I quit sorting 20 minutes ago, but the stress is still there. This is why I need to monitor my stress: it builds up very easily, but it doesn’t go away. Unless I stop in time, when my recovery system is still functional.

Unfortunately I’m totally used to ignoring my body (yes, I’m working on that), but there’s a signal that I do recognise as a red flag: when I keep telling myself ‘just a little bit more’. Basically, that’s the sentence I use to ignore those signals. There’s a whispering voice somewhere in my head that suggests it might be time to take a break. This voice will be met by a loud choir of ‘just a little bit more’, on repeat. Just until the easy bit of the task is done… Just until I’m half way… Just until this bit is finished… The choir comes up with a bunch of suggestions to keep me going.

I used to think that these voices help me to get a job done. Now I know that they actually INCREASE my procrastination. This is how that works:

Expecting a bad outcome, is a trigger for procrastination. When it comes to sorting out my administration and decluttering, I have a long list of bad outcomes:
– I can’t find stuff and I’ll feel like an idiot for not being a tidy person.
– I’ll find things I did wrong (like invoices I sent out with the wrong date) and feel stupid: How hard is it to put the right date on a piece of paper?
– I’ll get really, really, really tired before I have the result I’m aiming for, and feel desperate.
– I’ll have to make decisions that are difficult to me(Shall I keep this or throw it away? Where can I put it so that I’ll be able to find this again?) and feel like a twat that all that stuff is so hard.

There’s probably more I could add to that list, but it’s enough for now. Somewhere during this writing process the stress in my shoulders has lessened. Does that mean I’ll work on my project now? No!

Reality check… what I actually did, was another chore… bringing paper to the recycling station (a 3 minute walk). While I did that, I noticed I was too tired and doing another chore instead of the break I had promised myself. My brain is really good in luring me in, providing arguments like: It’s nice weather outside, it’s good to enjoy that for a bit. It’s physical exercise, that might help you relax. You’ll throw away some of the stuff you sorted, that will make you feel good.

Whenever I hear myself give me more than one excuse to do something, I’m probably in overdrive, denial, or any other mode that’s not getting me where I truly want to be.

After that, I did get some rest.

Now I have my third blog post for #NaBloPoMo done. There’ll probably be another post today, as I’m trying to make up for a late start.

My book, yay! Buy it here 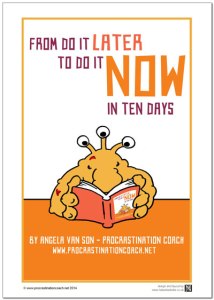 My monsters on RedBubble!